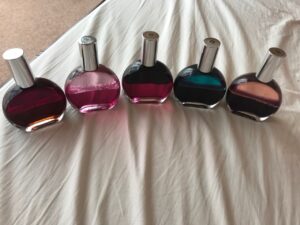 What would it be like as Matt Kahn says to look in the mirror and realise, the person you see appearing in awareness is actually awareness itself – momentarily appearing as a person.  What does that give you? Let’s take that into current reality.

What are you aware of at the moment? How do you feel about coming out of lockdown? What are your thoughts about having to wear a mask in shops from 24 July in the UK? What I have noticed is an increased irritability at being told what to do; and the exhaustion that is masked as impatience when faced with people still prefer to believe their story, based on self-limiting beliefs rather than choosing to wake up!

In fact whilst there may be no huge aha moments, there are lots of signs like buds appearing if you know where to look. Take a look at this photo – all Magenta bottles which is all my clients seem to want at the moment. Which bottle are you drawn to? I would love to know.This interest in Magenta is an example of the shift that’s happening. Let me explain how.

I have been curious at just how many people have been drawn to Magenta in the last few weeks. It started about 3 weeks ago when I was preparing to talk about how bottle 66, Sartori, brings in bliss and breakthroughs that become a permanent new way of seeing. Check out those further insights here.

Then in a catch up with an old colleague much of our conversation was about her sudden interest in Magenta. After that I had two clients pick bottle 44, which represents new beginnings and then suddenly I had sold all those bottles and various other Magenta bottles. Perhaps the strangest happening was when a woman who was looking to rent our house asked me to talk about colour and was immediately drawn to bottle 22, another Magenta bottle. When I gave her the bottle to hold and connect to, silent tears started rolling down her face. Leaning into this phenomenon, I focused on Magenta in the first of the next series of heart connection tune ups.

What does Magenta mean?

Magenta represents unconditional love and in Colourful Boardrooms I spoke about how it is the way into a deeper spiritual understanding.  It is the colour people choose when they are seeking answers. I really feel that people are starting to realise that the self is a construct because the you that you think you are is not who you are at all because that is just a story that you are telling yourself full of assumptions and interpretations.

For me personally, I have been wanting to build more strategic alliances and I now have two embryonic ones. Last week in a conversation Helen shared that her logo was magenta in part. This led to a long online conversation about the meaning of her logo. Then she asked me to write what it all meant as an articlefor her website. This gave both of us a lot of pleasure and who knows what will unfold next.

What the reset is not?

So how do you wake up? Or how do we ensure there is a reset? One way I have noticed amongst some passionate folk, which isn’t sustainable, is to force it. Recently someone was very vocal about the heart connections that I run saying that they represented where we had been the last 20 years and focusing on the self was no longer needed. This in my experience is misguided because as humanity evolves we are not all at the same stage. And forcing is just over exerting one’s masculine and can alienate those you want to support. Those of us in business are best placed to serve those just behind us.

What helps you to stop forcing change?

You can avoid forcing by working with a second colour along with the Magenta and that’s Royal Blue. Royal Blue/ Indigo helps support the development of your intuition so that you can trust your own spiritual GPS. You will sense when something feels aligned or if it feels “off.” The more you work with it the more you will be building your intuitive muscle and the easier it will be to let go of control. Indigo can also bring about structure which will further enable your initiation which always tends to happen when you are deepening your spiritual understanding.

What do the combination of Royal Blue & Magenta hold?

What I love is then to consider what the combination of these two colours gives you. Anyone choosing both Magenta and Royal Blue is well on their way to mastery and it would suggest that such a person came back this time to teach and to become a spiritual elder. These kinds of people tend to have a lot of power and will really start becoming an influencer the more they lean into their intuition whilst building their faith muscle. Faith is vital because when you are nearer the start of the journey, it’s hard to see what’s coming so you are required to have faith in the unseen.

To conclude if you really want to be part of the “reset ” that people are talking about, start by looking in the mirror and seeing if you see awareness looking back you taking on human form for a moment. Some prefer to rely on formulas and techniques yet those ultimately will fail you. It can take a while to realise this as initially there may be some relief from the angst you are feeling. Realisation comes more quickly, the more you build your intuition muscle.

You are awareness
Tagged on: awakening    Colour Mirrors    conscious leadership    consciousness    intuition    magenta    Matt Kahn    sartori    seeker    soul    wake up    woke
This website uses cookies to improve your experience. We'll assume you're ok with this, but you can opt-out if you wish.Accept Read More
Privacy & Cookies Policy