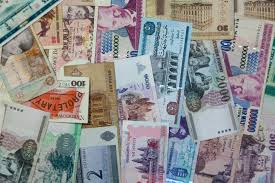 In many cultures talking about money is taboo and yet we are being asked to examine our relationship with the green stuff right now.  Let me start by sharing some patterns that I have become aware of.

Personally thanks to lockdown, I have spent less money which has offset the loss of some clients.  Clients of mine have said that they have noticed a change too.  Pre-lockdown they were indulging in retail therapy at least once a week to compensate the demands of a stressful job.  Working from home has meant they can set the pace of their work more, fit in more exercise and have not missed their shopping habit.

Money is an integral part of our reality on this 3D plane so not surprisingly it is something most people spend a lot of time thinking about.  Find out for yourself by doing this exercise.  Go about your day as normal but note down in your journal or online how often you think about money.  One person who did this noted that she thought about it no less than 60 times in about two hours!

How is that possible you might ask?  It comes from having a monkey mind that part of you that moves from doubt to worry to fearing back to doubt again.  Whatever you do that part of you will always exist.  Some call it the ego – it’s the part of yourself that wants to protect you from failure.  The key is to be aware of it and how it affects your mood when you listen to what it whispers in your ear and even go as far as thanking it and then carrying on anyway.

I like the analogy that it is a beehive.  If you prod the beehive then you will stir up the bees inside, they may well swarm and at the very least some will get angry and come out and sting you.  That would be painful so let it be.  Acknowledge its existence and carry on.

How to get more of what you want

My definition of success is doing what you said you would do with ease.  How is that possible with the monkey mind you might be asking?  Here’s my 101 guide to how life works.

There is the metaphysical plane where there is a whole load of untapped energy swirling around.  As you may know what you focus your energy on grows.  So the first step comes with having ideas which could be I want to travel the world; own an Aston Martin; buy a bigger house; learn to sail. It is different for each of us.

The second step is to set some intentions.  These need to be aligned to your values.  To give you an example.  One of mine is to run a successful business.  When I explored that further it had other aspects to it.  It was very important that I was making a difference and that meant having a social enterprise arm to what I do. That is why I created Colourful Classrooms, my work to build emotional resilience in young people.  Another aspect of it for me is letting more people know the impact that colour can have on their lives because of the powerful shifts I have witnessed.

The final step is taking aligned action, in other words doing things that are congruent with the values you identified when setting your attentions.  It sounds easy so why do so many people fail to become successful?

Here’s the key: where the metaphysical and the physical plane meet, it’s like there is a strong magnetic pull. It can be explained by Newton’s third law: for every reaction there’s an equal and opposite reaction.  Let me give you an example of what I mean.

Currently I am in the process of formalising an informal collaboration.  Recently I found out about an opportunity that would allow us to set up a conscious contract.  Everything seemed to fall into place really quickly; and then at the eleventh hour the third party threw in a curve ball.  My partner and I discussed it and came up with some alternatives which we shared with the third party.  Unfortunately it wasn’t enough and the third party decided they did not have the bandwidth to proceed.  For several days we did not know if there was a way through. We held the faith and pursued everything we could and we now have another lawyer who wants to work with us.

Here’s the nugget: the key to ease in life includes discomfort.  How are you with difficulty and pain?  Running a business isn’t for everyone because you need a lot of resilience.  I would argue you need that whatever path you choose in life, resilience will help you get there.

I have continued taking steps towards making my intentions a reality because I realised that we all have a choice to either energise our dreams or worry about failure.  In the past I thought it was enough to set the intentions and I forgot the crucial step of taking aligned actions so very little happened. Not every step works out as you hope which is where resilience comes in so you can be with the discomfort and where the support of a good coach or mentor can be critical to making that change.

In summary it’s important to remember that security is an illusion that some like to cling onto. As Maria Nemeth said How do you spell success? W-O-R-K.  It’s about taking one small step and then another step.  Don’t wait until you feel good or have high self-esteem to take aligned actions.  Take aligned actions as a way to materialise your dreams and notice how your sense of self-esteem increases along with your bank balance!